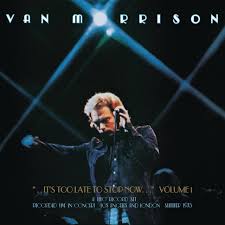 Be the first to review “Van Morrison – …It’s Too Late to Stop Now Vol.1” Cancel reply