This week a nice few gems have hit the shop floor.. The local boy himself returns with his fifth offering.. As strong as ever.. Maybe even stronger to be honest…. Greatly crafted tunes once again.. Five albums in now, MICK FLANNERY has a lovely catalogue of work… This new one is a bit more edgy in parts, the usual exemplary balllads, and even a hint of disco and drum and bass in parts! Great listen once again..

MICK is with us to play a few tunes from the new record next Friday the 21st at 1PM. Say hello and sign a few records as well… I Know the time may not be the Mae West but if you can’t make it and want a copy of the CD or LP signed, pop me a mail with your little message and we shall organise.. This is Mick’s third in-store with us… He has never said no to us… Drunken texts or no drunken texts, that tells it’s own story folks… 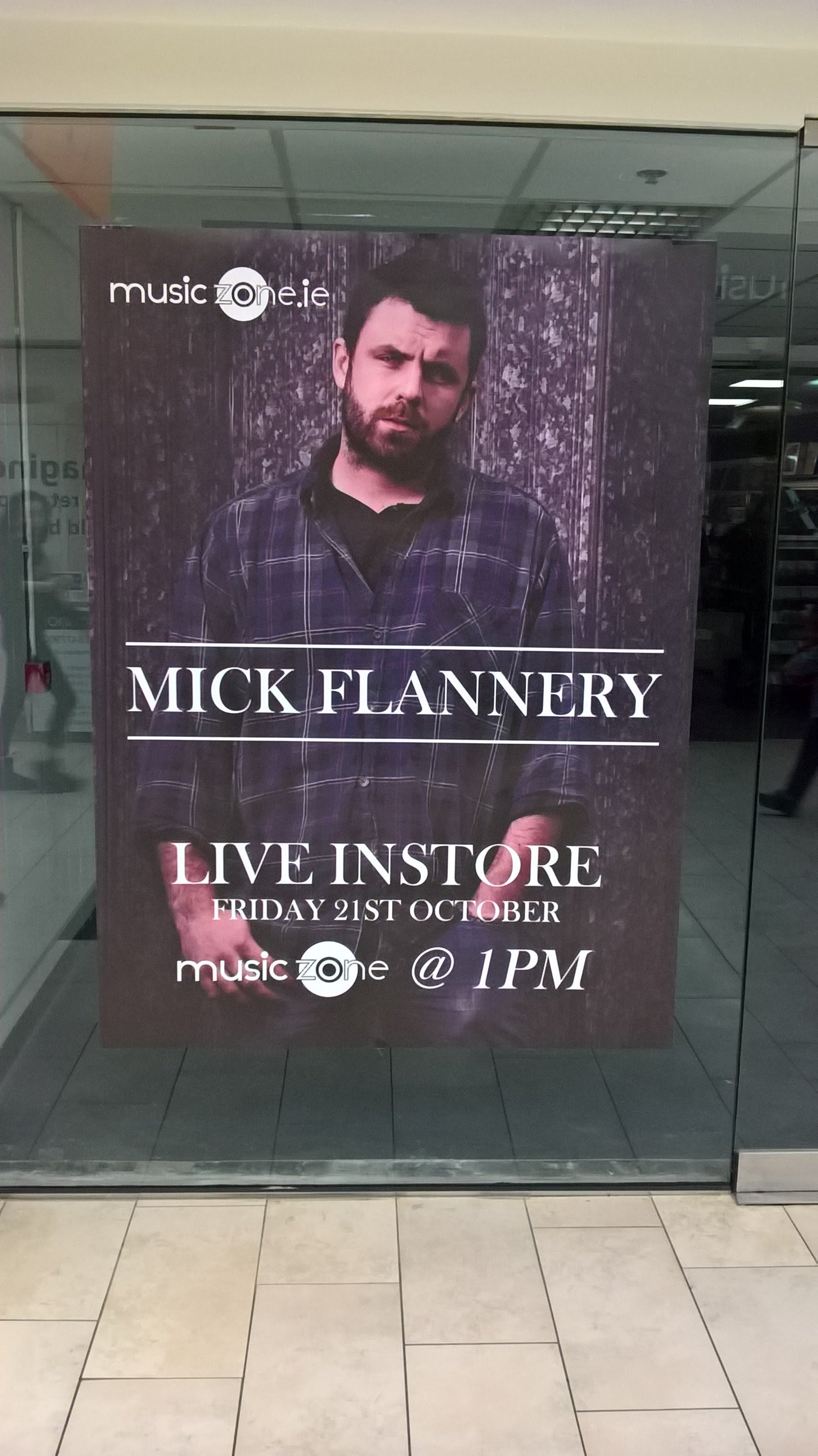 Also in the shop today are new albums by the excellent BELL X1, KINGS OF LEON (I like BTW), TOM CHAPLIN of Keane fame has a solo album, and a new album by CONOR OBERST. Some class reissues also from the mightyDEPECHE MODE, BEASTIE BOYS, and OASIS to name a few… The video will give a full update of what’s new.. I forgot a few no doubt! Be sure to subscribe to the YouTube channel!

On to releases for next Friday the 21st of October… The biggest being the Original Cast Recording of LAZARUS on 3LP or Double CD which debuts three tracks from the MCCASLIN / BOWIE ‘Blackstar’ sessions.. Blackstar is still one of the albums of the year for me..

It has been a turbulent 27 hours (as I write this… About 48 hours before ye read it..) in the Music Zone Corporation… A great crime was committed on Wednesday evening after the shop closed… I received a horrifying email from an organisation known as the Blackstar Liberation Front with a subject matter of HERESY!! It shook me to my core.. It read :

‘MUSICZONE, we have your poster of the TRUE ONE. Remember, it is written in the laws of the universe that you cannot expect to blasphemies against BOWIE and not suffer retribution…’ It was signed in what looked like blood… ‘BLACKSTAR LIBERATION FRONT’.

I was distraught… I couldn’t eat my dinner.. What had I done… Then it dawned on me… I Had lightly and loosely mentioned the strong rumour that Donny McCaslin was the creative and musical force behind the Blackstar album…. I suppose Bowie was on his deathbed at the time to be fair..

Since Wednesday night I have received two more menacing and threatening emails and one mocking one, where they took David to the cinema, the bookies and the boozer.. 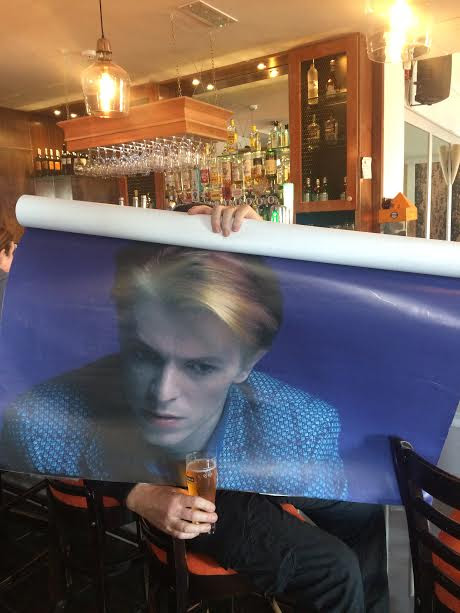 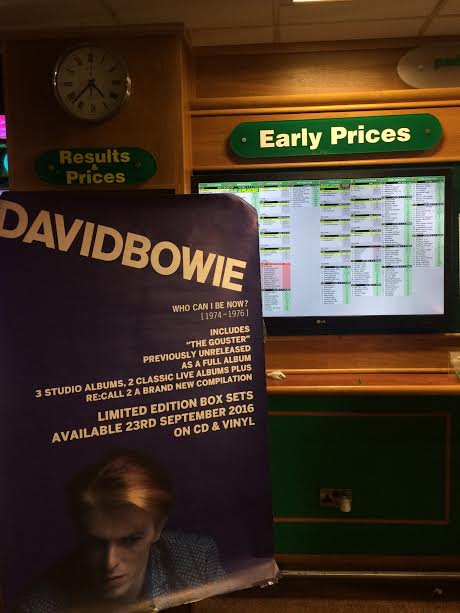 I really don’t know what these characters are capable of… Is there a possibility of violence? I have contacted the Gardaí about the matter, who told me these zealots whom they reckon probably are not the most intelligent characters in the world, did have one brainwave by disabling the CCTV cameras on the mall…

There is one image of the criminals after becoming known to the Gardaí in recent hours… It has currently been scanned through Interpol’s Database, and the Gardaí are running it through PULSE as well.. RTE’s Crimewatch has been sent on the photos as well… If anyone recognises either of these criminals please report it to the Gardaí..  DO NOT TRY AND APPREHEND THEM.. Maybe it is someone’s grandfathers?… I hope interrogating and common sense will prevail and Bowie will be returned to his rightful home… 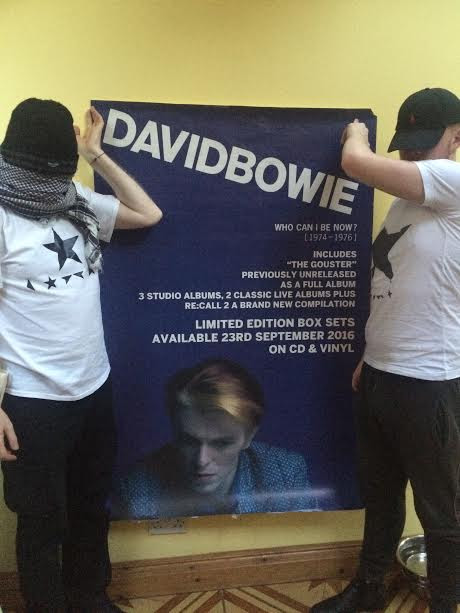 Back to the releases! Also out from Sony for next week is the brilliant Mr. LEONARD COHEN with his 14th studio album… CD only next week.. LP late November now… Sounds f**king great!! JIMMY EAT WORLD has a new album, and there is also a new JOE COCKER compilation out..

Proper for next week have the new JOAN AS POLICE WOMAN on CD or LP, with poster + CD..

Republic of Music for the 21st have the BRIGHT EYES studio album boxset, ‘2000-2011’.. Limited to 1000LP, or 5000CD worldwide.. LPs are coloured.. Republic of Music also have a new BELLE AND SEBASTIAN compilation, ‘Jeepster Singles Collection’, as well as the new TEENAGE FANCLUB single..

Universal for the 21st of October have the new RIPTIDE MOVEMENT album.. Fine rock n’ roll band… Irish also… Could very well be an exciting announcement about Riptide and Musiczone very soon… Hopefully I will confirm next week..

Universal also have JOE DOLAN ‘With The RTE Concert Orchestra’,  STATUS QUO’s second acoustic album in the series, a new PRETTY RECKLESS album, the mighty SANTANA ‘Live At The House Of Blues’, a new DAVID CROSBYalbum ‘Lighthouse’, plus some 5CD sets on Bluenote by the likes of HERBIE HANCOCK, WAYNE SHORTER and ART BLAKEY….

Universal on the vinyl front have a bunch of reissues by BON JOVI, six CHEMICAL BROTHERS reissues, JOHN MARTYN’s classics ‘Grace and Danger’ and ‘One World’, and there are three more in the Abbey Road Half Speed Master Series, ELBOW’s ‘Cast of Thousands’, AMY WINEHOUSE’s ‘Back To Black’, and THE WHO ‘Live at Leeds’… 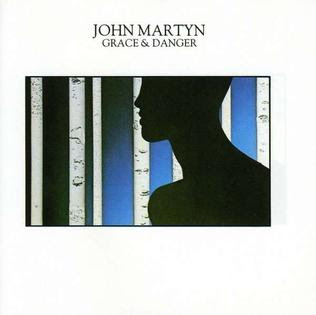 Warner for the 21st have a new PRETENDERS record ‘Alone’ on CD, and LP, as well as a new RUMER CD, a new OBITUARY live album, and a reissue of EMMYLOU HARRIS’ ‘Red Dirt Girl’.. Also from Warner is the new CD from Michael Bublé..

Be warned Bobby, Cormac and Shane… Christmas is getting close, the corporate bastard comes out in the boss man, and the Bubmeister has a new one out… One dash of the Bubmeister turns people of a certain set to jelly and outs dollars into the till.. Ho ho ho!!

PIAS have the new AGNES OBEL album, as well as the second album on Indies only red and orange splattered vinyl by AMERICAN FOOTBALL.. 17 years now since album one.. Lastly from PIAS is the exquisite ‘69 Love Songs’ by the equally exquisite THE MAGNETIC FIELDS as a 6 x 10’’ vinyl boxset..

Lastly today, but certainly not least, WINDINGS came in to play tracks from their brilliant new album ‘Be Honest and Fear Not’.. As I said before, this record is up there with any Irish record this year gan aon dabht.. It is excellent in my opinion… It was a great little intimate acoustic gig from Steve. 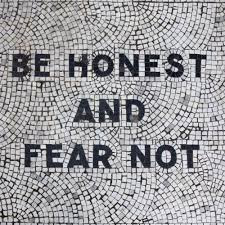