Hey Everyone,
hope all is good…
Going fierce hi tech tonight, Google thought i was sending out spam so only about half of ye were  receiving the newsletter…so going with my new buddy, Mail chimp!!
Maiden voyage tonight so its a fingers crossed job….all part of the service folks!!
Unfortunately, wont be any attachments for the next week or two, but will be fully functional by the new year….turning into a right corporate….i hear ye say.
Anyway, on to the tunes. 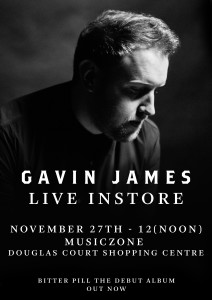 Gavin James performed in store last Friday at 12 noon….singing and signing, signing and singing…
Gavin’s new album is only out and is a lovely listen.

Today FM has announced the release of
Whole Lotta Live, an album compiled of 30 tracks recorded at the station over the years by Irish and International acts. The album will be availaible from 27th November on double CD and download. 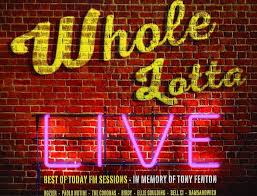 As a tribute to Tony Fenton and others affected by cancer, the proceeds from the sales of this album will go to The Irish Cancer Society via Today FM’s Shave or Dye campaign. Over the last 6 years, Shave or Dye has raised over €8 million for The Irish Cancer Society.
Speaking about putting the compilation together, Pamela Blake, from Today FM, who worked with Tony as producer for many years says:
“This album is inspired by and dedicated to our dear friend and colleague Tony Fenton. Irish radio lost a shining light in 2015 and he is greatly missed. Tony was a genuine, soulful lover of music. He supported all of the artists on this record and relished having bands and singers live in studio for a chat and a song or two. You could hear the excitement in his voice over the radio when he was about to witness a live performance – and we’ll never forget that grin and sparkle in his eye of pure enjoyment and love for his work”.
Tracklist
1. Hozier – Whole Lotta Love
2. The Coronas – Someone Else’s Hands
3. Ham Sandwich – Ants
4. Glen Hansard – Lay Me Down
5. Bell X1 – She’s A Mystery To Me
6. Paolo Nutini – Pencil Full of Lead
7. The Cabin Collective – Marrakech
8. Villagers – Nothing Arrived
9. Lisa Hannigan – Little Bird
10. James Vincent McMorrow – Cavalier
11. Damien Dempsey – Negative Vibes
12. Columbia Mills – Never Going To Look at You the Same
13. Marc O’ Reilly – Wayward Sheperd
14. The Minutes – Cherry Bomb
15. Josh Ritter – Galahad
16. Foy Vance – The Theme from Cheers
17. The National – I Need My Girl
18.  Kodaline – The One
19.  Birdy – Wings
20. David Gray – This Year’s Love
21. Relish – Stuck In A Moment
22. Ellie Goulding – Your Song
23. Paul Noonan & Lisa Hannigan – Some Surprise
24. Hudson Taylor – Chasing Rubies
25. Lianne La Havas – Lost & Found
26. Amy McDonald – Dancing In The Dark
27. The Coronas – Lakes of Ponchartrain
28. Mark Lanegan – War Memorial
29. Agnes Obel – Riverside
30. Gavin James – Magic

Since 2010, Today FM’s Shave or Dye campaign has raised over €7.55 million for The Irish Cancer Society, thanks to the generosity and spirit of the listeners. This year, one person every 15 minutes will hear the words ‘you have cancer’. With your help, the Irish Cancer Society can ensure it is there for every one of those people who hear those words. 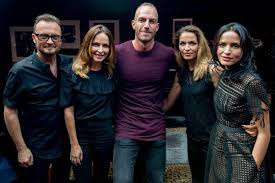 Warner also a new CORRS album, their first album in a good number of years.

Warner also have a lovely EDITH PIAF 100th anniversary CD box set as well as her vinyl record reissues, a CARLY SIMON retrospective CD collection to coincide with her book and there is also a nice MILES DAVIS CD box set – the Warner years.

Warner also have a few limited Black Friday vinyl record releases in with us for tomorrow including THE JESUS AND MARY CHAIN, BRIAN WILSON, THE BUZZCOCKS, GREEN DAY and THE GANG OF FOUR.

PIAS have not much for tomorrow, some Helloween LP reissues and the new record from Icelandic band FUFANU, who are supporting John Grant on his European tour early next year which is coming to the Opera house in January….not sure if they are in the Opera house…here is a listen anyway…
https://www.youtube.com/watch?v=0tQxgReoV5A 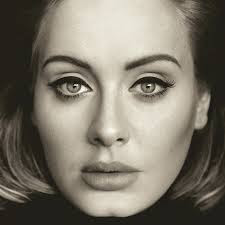 I suppose PIAS had a decent enough release last week, so we will leave them off for  this week…
The new ADELE album sold something like 2.2 million copies over the counter globally last Friday, Saturday and Sunday….Adele not wanting it on ITUNES. or SPOTIFY for the time being anyway….will we do a verse of the hymn again this week….she is…..we sold 63 copies those three days last weekend, which is huge for our corporation….as they would say round her way….Lovely Jubbly…round our way it’s Dowchta Del girl….she has risen from XL and she is God…..

Sony have another reissue of the brilliant MANICS record ” the holy bible” …..i have waxed lyrically in the past about this album so i shan’t bore again….still have some RSD picture disc ones in stock…now on standard black vinyl as well at a good enough price point as well…20 quid.
Sony also have a new IL DIVO CD out tomorrow.

UNIVERSAL have a reissue of the lovely GREGORY PORTER album ” liquid spirit” ….quick listen here, give it me more than 30 seconds though…..

Placebo’s MTV unplugged is reissued on a load of formats also through Uni and there is also another JAM set, this one called “about the young idea”.

Some of you may have noticed the site is changing….for the better i hope…..loads to be done yet to have it right….stocks are a bit all over the shop ( no pun) and no new stuff put up over the last fortnight or so….but see what ye think….still a lot to be done.

So, sin e for this week,
hope this finds you…
Thanks,
Ray.